From sweeping new tax proposals to an extension of the Paycheck Protection Program, we have recently seen significant developments in estate planning and business law. To ensure that you stay abreast of these legal changes, we have highlighted some noteworthy developments and analyzed how they may impact your estate planning and business law practice.

"For the 99.5 Percent Act" Introduced in the Senate

On March 25, 2021, Senators Bernie Sanders and Sheldon Whitehouse introduced the “For the 99.5 Percent Act” (the Act), which would make sweeping modifications to the estate, gift, and generation-skipping transfer tax exemptions. If the bill passes, the changes will primarily affect transfers occurring after December 31, 2021. The Act would do the following:

Takeaways: Three important estate planning strategies—grantor retained annuity trusts, grantor trusts, and family entity discounts—will no longer be effective to achieve substantial gift and estate tax savings if the Act passes. Because most of the proposed changes would not be effective until 2022, estate planners should encourage clients who are likely to be affected to make changes necessary for tax minimization now.

Ultra-Millionaire Tax Act of 2021 Introduced in the Senate

On March 1, 2021, Democrat Senator Elizabeth Warren introduced the Ultra-Millionaire Tax Act (the Act), which would impose a tax of 2 percent on the net value of all taxable assets of taxpayers in excess of $50 million up to $1 billion. Taxpayers with taxable assets of $1 billion or more would have to pay an additional 1 percent, meaning that their total annual tax would be 3 percent. If Democrats pass a “Medicare for all” health law, the tax on billionaires would increase to 6 percent for years in which that legislation is in effect.

This tax would apply to individuals and trusts. However, married couples would be treated as one taxpayer under the Act, as would all trusts with substantially the same beneficiaries.

Economists have indicated that if the Act passes, approximately 100,000 taxpayers will be subject to the ultra-millionaire tax in 2023. Some economists have projected that the tax would raise $3 trillion over a decade, and others have found that it would reduce long-run gross domestic product by 0.37 percent. Its scope would not be limited to US citizens: Individuals who are nonresident noncitizens will be subject to taxation on property they own that is situated in the United States.

The Act would also put measures into place to prevent tax avoidance including additional funding for the Internal Revenue Service to aid its enforcement efforts, a 30 percent minimum audit rate, and a 40 percent exit tax on the net worth above $50 million of taxpayers who renounce their citizenship to avoid the ultra-millionaire tax.

Takeaways: Commentators have said it is unlikely this bill will pass, as it does not have President Biden’s support. In addition, the yearly assessment necessary for this type of tax would be very difficult to implement, as very wealthy taxpayers have complex business interests and property held around the world that would be difficult to locate and for which it would be difficult to establish a value. However, attorneys representing ultra-high net worth clients should continue to monitor the bill.

William Ryan engaged attorney Peter Gorton to prepare a will for him. Gorton was aware that Ryan was ill. Because of COVID-19 restrictions, Ryan and Gorton made arrangements for Ryan to sign the will in the parking lot of Gorton’s office. Ryan was hospitalized before the signing could take place. Because visitors were not allowed to enter the hospital in accordance with COVID-19 restrictions, Gorton’s staff arranged for a social worker to be with Ryan for the signing on June 1, 2020. Gorton’s staff delivered the will in a sealed envelope to the social worker, who took the will to Ryan in his hospital room. The social worker remained with Ryan for the signing and used a cell phone to act as a videographer for the execution of the will. Gorton and his staff attended the execution ceremony remotely, live from a computer in their office. Gorton and his staff had received a copy of Ryan’s driver’s license in advance and were able to verify Ryan’s identity and watch him open the sealed envelope. Gorton asked Ryan if the document was his will and he responded that it was. Gorton also asked Ryan if he wished Gorton’s staff to serve as witnesses to the will execution, to which Ryan responded yes. Gorton and his staff watched Ryan sign the document he had identified as his will via the social worker’s cell phone. The will was immediately transported to Gorton’s office, where the staff who had watched Ryan sign the will executed the attestation clause and witness affidavit. Ryan died two days later, on June 3, 2020.

The Surrogate’s Court found that, in light of the COVID-19 restrictions, the remote execution ceremony satisfied the requirements of N.Y. Est. Powers & Trusts Law section 3-2.1(2)(a), which requires the signature of the testator to “be affixed to the will in the presence of each of the attesting witnesses.” In addition, the ceremony more than satisfied the provision for virtual execution set forth in Governor Cuomo’s April 7, 2020, Executive Order 202.14, which allows witnesses to sign an electronically transmitted signature page of the will. As the court was satisfied that the execution of the will had been established and that the will was valid, it admitted the will to probate.

Takeaways: The stringent restrictions imposed last year in response to the COVID-19 pandemic prevented many elderly and ill clients—those most in need of estate planning documents—from having in-person meetings with their estate planning attorneys to execute wills. Many states did not put measures in place allowing the remote witnessing of wills, but others established emergency measures that permit witnesses to sign electronically or to witness signatures on wills remotely by video. This case is the first published decision in New York addressing the remote witnessing of a will. Given the conditions we have experienced over the past year, additional cases addressing this issue are certain to come from around the country.

Estranged Wife of Larry King Contests His Holographic Will

Famed television broadcaster Larry King passed away in January 2021. Larry King’s son, Larry King Jr., has filed a motion to become a special administrator of his estate, asserting that the California Probate Code gives him statutory priority over King’s estranged wife, Shawn King, to act as special administrator of the estate because King and Shawn had been involved in ongoing dissolution proceedings and had been living apart from each other since 2019.

Larry Jr. submitted a handwritten will dated October 17, 2019, in which King stated, “This is my Last Will & Testament. It should replace all previous writings. In the event of my death, any day after the above date I want 100% of my funds to be divided equally among my children Andy, Chaia, Lary Jr Chance & Cannon. [sic]” Andy and Chaia passed away in 2020—after the holographic will was written but before their father’s death. The will is apparently in King’s handwriting, signed by him, dated, and signed by two witnesses.

King filed for divorce from Shawn, his wife since 1997, two months before handwriting the will. The divorce was never finalized, however.

Shawn has opposed Larry Jr.’s motion and asked the court not to admit the holographic will to probate, arguing that King was not pursuing the divorce, reconciliation had remained possible until his poor health had made further efforts impractical, the holographic will did not revoke his prior will but only purported to supersede it as to the dispositive provisions, King was susceptible to outside influences on the date of the holographic will, and King was possibly under the influence of preoperative medication when he wrote the will. In addition, Shawn has asserted that postnuptial agreements limited King’s ability to make testamentary gifts to his children.

Takeaways: Holographic wills (valid in only about half of the United States) executed when the testator is sick and elderly are particularly vulnerable to will contests on the basis that the testator was not of sound mind or was under duress at the time it was executed. Attorneys can point to the unfortunate circumstances that have arisen after Larry King’s death to explain why a professional estate plan is so important for maintaining family harmony and ensuring that a decedent’s wishes are carried out. Although King’s handwritten will was executed before the COVID-19 pandemic, it remains to be seen how courts will treat such wills in situations in which a testator executed a holographic will after being unable to meet with an estate planning attorney due to COVID-19 restrictions.

Attorney Equity Partner Not an Employee Under the Civil Rights Act

Shawna Lemon (Lemon) was a shareholding partner and equal owner of the firm Myers Bigel. After ten years as a partner, she applied for short-term leave. The firm’s board of directors, of which Lemon was a member, voted to deny the leave on the basis that she did not qualify for it. Lemon resigned and then filed suit alleging, among other things, race and gender discrimination under Title VII.

Title VII prohibits employers from discriminating against any individual with respect to compensation, terms, conditions, or privileges of employment because of the individual’s race. It also prohibits retaliation against an individual who has opposed practices made unlawful under Title VII. The court stated that the protections provided under Title VII extend only to employees. The Fourth Circuit Court of Appeals noted that Title VII provides only a circular definition of an employee as “an individual employed by an employer,” but that the US Supreme Court has determined that it should be understood as describing the “conventional master-servant relationship as understood by common-law agency doctrine.” Clackamas Gastroenterology Associates v. Wells, 538 U.S. 440, 445 (2003). Generally, under agency law, employees are distinguished from employers by determining who possesses the right to control the progress of the work. The Fourth Circuit noted that Lemon was a full member of the board of directors with equal voting power who was paid as a co-owner or employer according to a formula that varied with the profits and losses of the firm, could be fired only by a majority vote of the full board, and reported to no one. Accordingly, the court found that she was not an employee within the scope of Title VII, but rather was “as fully integrated into MB’s management structure as anyone could possibly be,” and that her claim had been properly dismissed by the district court.

Takeaways: Lemon was unable to identify any Title VII case law supporting her position. The court was unwilling to assign itself “the task of single-handedly refashioning the foundation of a prevailing form of legal practice,” as Clackamas and common law tradition provided no warrant for it and its sister circuits had warned against it.

On March 30, 2021, President Biden signed the PPP Extension Act of 2021 into law. The law extends the Paycheck Protection Program (PPP), which was scheduled to expire on March 31, 2021, for two months. Business owners now have until May 31, 2021, to apply for a PPP loan. Further, it provides an additional month—until June 30, 2021—for the Small Business Administration to process pending applications.

Takeaways: Small businesses eligible to apply for first or second draw PPP loans now have additional time to apply and have their loans approved before the expiration of the PPP. Nevertheless, businesses need to apply as soon as possible to take advantage of the program before the funds allocated for loans are exhausted. 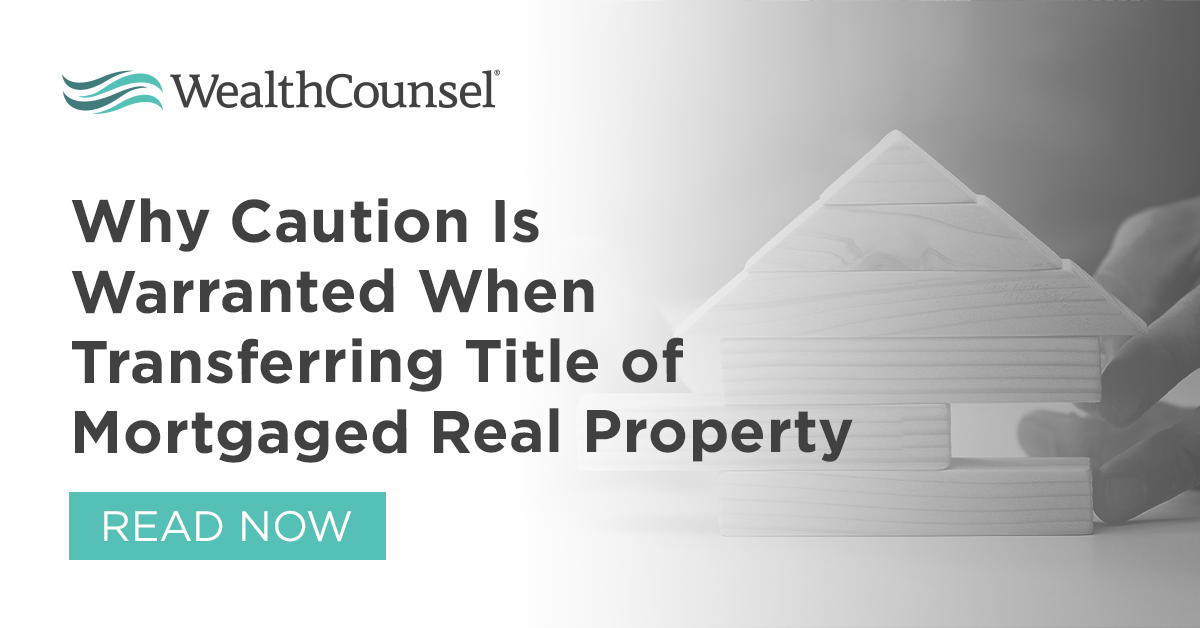 Why Caution Is Warranted When Transferring Title of Mortgaged Real Property 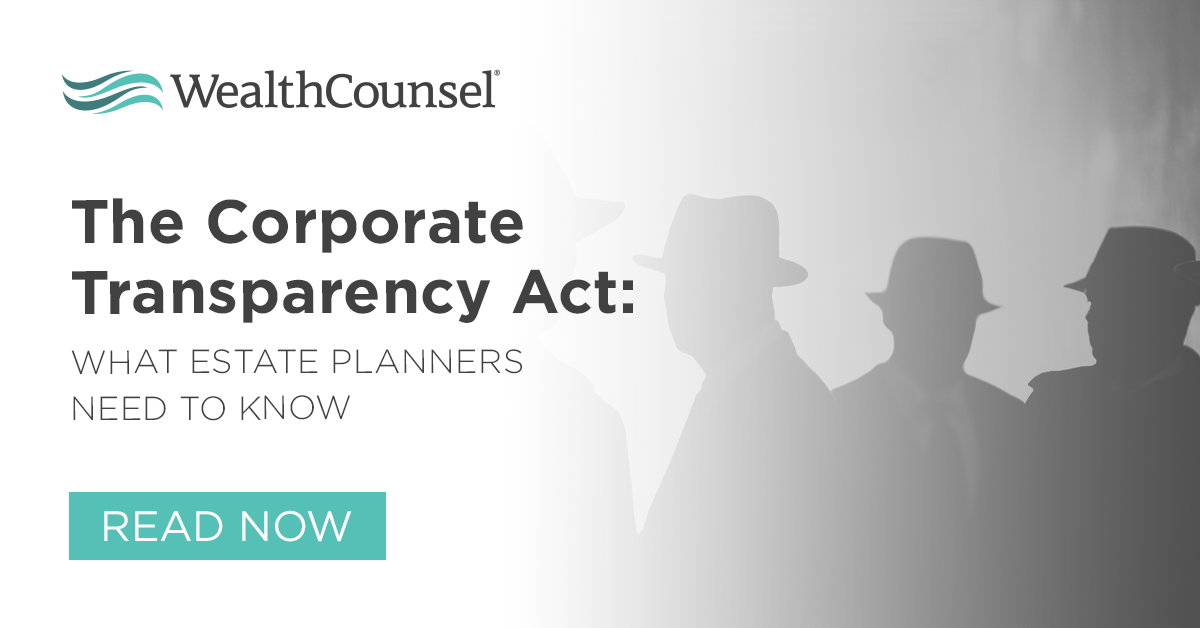 The Corporate Transparency Act: What Estate Planners Need to Know