From the release of the Build Back Better Act to the expansion of the federal COVID-19 economic injury disaster loan program for businesses, we have recently seen significant developments in estate planning and business law. To ensure that you stay abreast of these legal changes, we have highlighted some noteworthy developments and analyzed how they may impact your estate planning and business law practice.

Although negotiations continue, the House released its Budget Reconciliation Legislative Recommendations Relating to Infrastructure Financing, Green Energy, Social Safety Net, and Prescription Drugs and Budget Reconciliation Legislative Recommendations Relating to Retirement, also known as the Build Back Better Act (the Act), on September 13, 2021. The current version of the bill proposes the following actions, in part:

Reduce the gift, estate, and generation-skipping transfer tax exemption. Under the 2017 Tax Cuts and Jobs Act, the federal gift, estate, and generation-skipping transfer tax exemption was temporarily doubled to $10 million, adjusted for inflation ($11.7 million in 2021). The increase was set to expire on December 31, 2025. The Build Back Better Act would move up the expiration date and return the transfer tax exemption to $5 million, adjusted for inflation (approximately $6 million in 2022), on January 1, 2022. This decrease is less impactful than the $3.5 million exemption proposed by Senator Bernie Sanders in the For the 99.5% Act, but much more impactful than President Biden’s Green Book proposals, which did not include any reduction in the gift and estate tax exemption amount.

Eliminate valuation discounts for nonbusiness assets. Under the Build Back Better Act, when an interest in an entity is transferred, valuation discounts are not available for nonbusiness assets—passive assets held by the entity for the production of income—eliminating a gifting strategy commonly used by estate planners (e.g., no discounts for transfers of interests in family entities funded with marketable securities). Assets of an “active trade or business” may continue to be valued using the “willing buyer-willing seller” approach. This change would be effective upon the enactment of the Act.

Change grantor trust rules. The Build Back Better Act treats (1) the assets of grantor trusts (other than revocable trusts) as part of the deemed owner’s gross estate at their death, precluding the deemed owner from avoiding estate taxes; (2) distributions from a grantor trust during the deemed owner’s lifetime to beneficiaries (other than to the grantor, the grantor’s spouse, or to a creditor of the grantor) as taxable gifts; and (3) the assets of a grantor trust as a taxable gift by the grantor if the trust ceases to be a grantor trust (i.e., the grantor is no longer the deemed owner). In addition, capital gains (but not losses) would be recognized for sales of appreciated assets to the trust in exchange for a promissory note, eliminating a common strategy for transferring wealth free of estate tax. These changes would apply to grantor trusts established and funded on or after the enactment of the Act and to contributions to previously established trusts made by the deemed owner on or after the effective date of the Act. These changes would eliminate the effectiveness of grantor retained annuity trusts, irrevocable life insurance trusts, spousal lifetime access trusts, qualified personal residence trusts, and charitable lead annuity trusts.

Increase income taxes. The Build Back Better Act (1) increases the top marginal income tax rate from 37 percent to 39.6 percent starting at a significantly lower threshold of single filers making $400,000 in taxable income and joint filers making $450,000 in taxable income (the current threshold for the top rate is $523,600 for single filers and $628,300 for joint filers), effective January 1, 2022; (2) increases the top capital gains rate from 20 percent to 25 percent for top marginal income tax brackets starting at $400,000 for single filers and $450,000 for joint filers, effective September 13, 2021 (the date the Build Back Better Act was introduced); (3) subjects active business income to the net investment income surtax of 3.8 percent when adjusted gross income exceeds $500,000 for married couples filing jointly and $400,000 for single filers if the income is not subject to self-employment tax, effective January 1, 2022; (4) amends section 199A, which allows owners of sole proprietorships, S corporations, partnerships, and some trusts and estates to deduct up to 20 percent of income from a qualified trade or business, to limit the maximum allowable deduction to $500,000 for joint filers, $400,000 for single filers, and $10,000 for a trust or estate, effective January 1, 2022; (5) adds a surtax of 3 percent for all filers with an adjusted gross income of more than $5 million and estates and nongrantor trusts with an adjusted gross income of $100,000 or more, effective January 1, 2022.

Impose limitations on individual retirement accounts (IRAs). The Build Back Better Act (1) prohibits contributions to traditional and Roth IRAs for taxpayers in the highest marginal tax bracket if the total value of the IRAs and defined contribution retirement plans (not including employer sponsored plans such as 401(k)s, SEP IRAs, or defined benefit pension plans) are greater than $10 million; (2) imposes the following large required minimum distributions on specified retirement account balances for taxpayers in the highest marginal tax bracket, which are not based on the individual’s age: 50 percent of the amount that exceeds $10 million for combined balances between $10 million and $20 million, and 100 percent of Roth contributions that exceed $20 million for combined balances that exceed $20 million. These provisions would be effective January 1, 2022.

Require most employers to offer retirement plans. The Build Back Better Act would mandate that businesses that are more than two years old and that have five or more employees offer a retirement plan and automatically enroll their employees, who would initially contribute 6 percent of their pay to the retirement account. By year five, the automatic contribution would increase to 10 percent of the employee’s pay. Employees would be permitted to opt out of the plans. Businesses that set up the plans would be eligible for a tax credit and those that fail to set them up would be subject to a penalty. These accounts would need to be established by January 1, 2023.

Notably, the Build Back Better Act does not change current basis step-up rules, in contrast to the Biden Administration’s Green Book proposals and the STEP Act introduced by Senator Chris Van Hollen earlier this year, which had proposed treating death as an income tax realization event.

Takeaways: Further revisions are likely in the House and then in the Senate, but estate planners should take note of the proposed effective dates, as some of the proposals will take effect immediately (unless revised) if the bill is passed. Regardless of the effective dates, there is still time to revise clients’ plans in light of the bill if necessary to achieve their goals. If the bill passes this year, small business owners will have a full year to establish retirement plans for employees.

Learn more about the Act by registering for the upcoming Thought Leader Series webinar Estate Planning Under The New and Proposed Tax Laws, on November 9, 2021, 1:00 PM, ET.

Jeane Bertsch (Jeane) created a trust in 2015 in which she reserved the “right by an acknowledged instrument in writing to revoke or amend this Agreement or any trust hereunder” and nominated Nancy Thornton (Nancy) as successor trustee in the event of Jeane’s death, resignation, or incapacity. In 2016, Jeane drafted an amendment to the trust agreement that provided that her niece, Brianna McKee Haggerty (Brianna), would become the successor trustee at Jeane’s death and included Brianna as a residuary beneficiary. The 2016 amendment was signed by Jeane and witnessed by a notary public. In 2017, Jeane drafted an unsigned handwritten beneficiary list that did not include Brianna as a beneficiary, instead providing that the Union of Concerned Scientists (USC) would receive any residuary assets. Jeane drafted another handwritten document in 2018 revising the beneficiary instructions to specify that USC would receive half of the trust assets and that several individuals, not including Brianna, would receive equal portions from the remaining half. Jeanne signed this document and above her signature, wrote: “I herewith instruct Patricia Galligan [her former estate attorney] to place this document with her copy of the Trust. She can verify my handwriting.”

Takeaways: According to the court, California’s law was intended to provide flexibility to settlors, allowing statutory modification unless the methods specified in the trust instrument were exclusive. When drafting a trust, if the methods for modification or revocation specified in the trust instrument are intended to be exclusive, the trust instrument should explicitly indicate this. However, incorporating flexibility in trust documents is especially important now, as there is substantial uncertainty surrounding the federal tax proposals currently being considered by Congress.

Student Athletes Permitted to Profit from their Name, Image, and Likeness

In late June, the United States Supreme Court ruled in favor of student athletes who had brought suit against the National Collegiate Athletic Association (NCAA), alleging that the NCAA had violated federal antitrust law by instituting rules that limited the compensation that students could receive in exchange for the use of their name, image, and likeness based on their athletic services. In response, the NCAA has adopted a new interim policy allowing student athletes to benefit from their name, image, and likeness.

Takeaways: Business and estate planning attorneys can provide a valuable service to young athletes by assisting them in forming business entities and creating estate plans that can minimize their taxes and protect their assets.

Effective September 8, 2021, the Small Business Administration instituted an interim final rule expanding the COVID-19 Economic Injury Disaster Loan (EIDL) program, which has over $150 billion in available funds, in response to the adverse effects of the Delta variant on many businesses. The key changes are as follows:

The last day that loans can be approved is December 31, 2021, or when the funds run out (whichever occurs first).

Takeaways: With the expiration of the Paycheck Protection Program, the COVID-19 EIDL program provides a good alternative source of assistance for small businesses still negatively impacted by the pandemic. Businesses that have previously applied for COVID-19 EIDL funds should return to their portal to request a loan increase. New applicants may apply here. 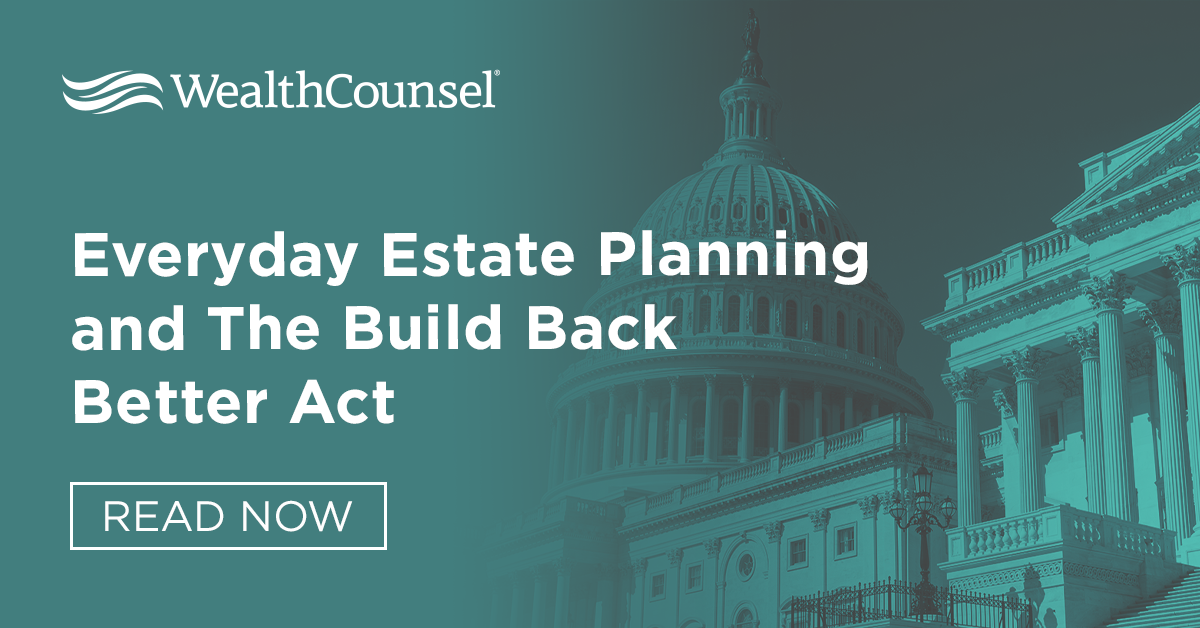 Everyday Estate Planning and The Build Back Better Act 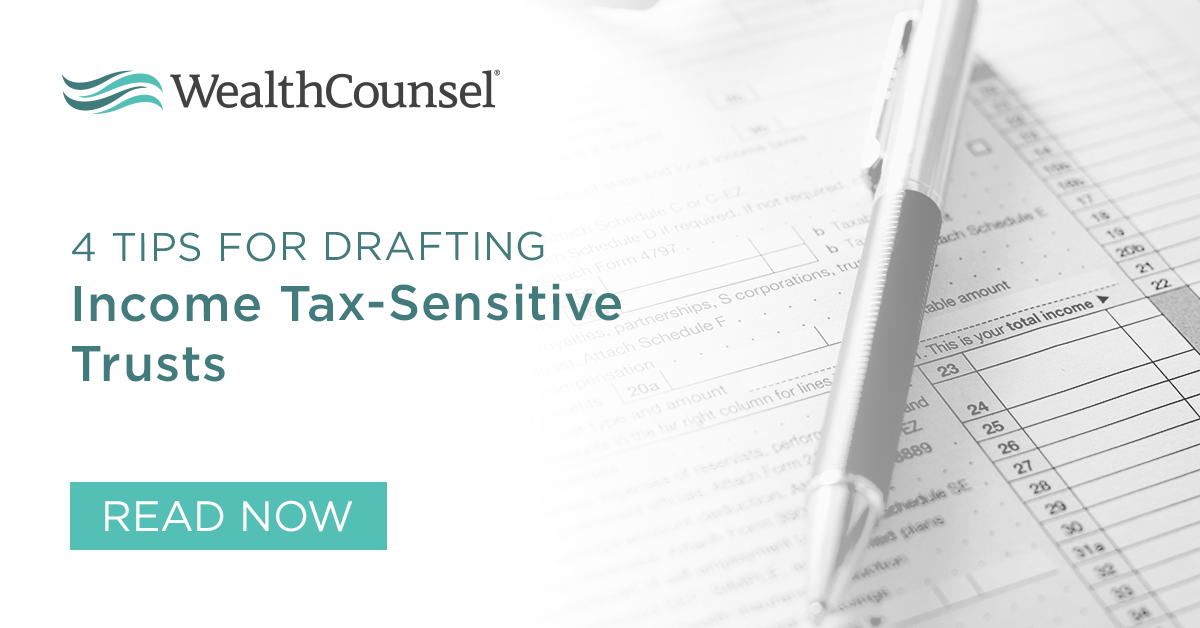