From an extension to elect out of automatic allocations of the generation-skipping transfer (GST) tax exemption to alternative business structures for legal services, we have recently seen significant developments in estate planning and business law. To ensure that you stay abreast of these legal changes, we have highlighted some noteworthy developments and analyzed how they may impact your estate planning and business law practice.

For GST tax purposes, the estate tax inclusion period (ETIP) closed for all of the GRATs, but Husband and Wife did not elect out of the automatic allocation of the GST exemption pursuant to I.R.C. § 2632(c)(5). Although they were represented by either an accountant or a trust and estate attorney at the close of all ETIPs, the accountant or attorney failed to advise them of the rules under § 2632(c) or their ability to elect out of the automatic allocation.

Husband and Wife requested—and the Internal Revenue Service (IRS) granted—an extension of time. The IRS concluded that the requirements of Treasury Regulation section 301.9100-3(b)(1)(v), pursuant to which a taxpayer is deemed to have acted reasonably and in good faith if the taxpayer relied upon a qualified tax professional who failed to make or advise the taxpayer to make the election, had been satisfied. As a result, the IRS granted Husband and Wife (assuming the couple properly consented to treat all gifts occurring in the years for which they had not already done so as being made one-half by each of them pursuant to I.R.C. § 2513) a 120-day extension to elect out of the automatic allocation of the GST exemption for the relevant transfers to the four GRATs.

Takeaways: Although the IRS granted the taxpayers an extension to elect out of the automatic allocation of the GST exemption, the couple may not be as gracious to their attorney or accountant, who could be liable for damages and receive ethics complaints for failing to advise the couple of their ability to elect out of the automatic GST exemption.

Takeaways: Although several states enacted e-wills statutes before the COVID-19 pandemic, it is likely that the pandemic will spur more states, like Illinois, to pass similar legislation.

Takeaways: Many estate planners recommend revocable living trusts (RLTs) over TODIs for their clients, as RLTs provide the best solution in the event the individual becomes incapacitated before death.

Helene Evans was a lifetime beneficiary of a testamentary trust created at the death of her husband, Donald Gillam, in 2012. The trust, containing the intangible property designated in Gillam’s will, was established under Montana law and administered by a trustee who was a Montana resident. Gillam’s will stated that Evans and certain other beneficiaries would receive the trust income and parts of the principal that the trustee, in his sole discretion, deemed appropriate after consulting with Evans about the needs of the various beneficiaries.

Gillam remained a resident of Montana, but Evans moved to Oregon several weeks prior to her husband’s death. As contemplated in Gillam’s will, the Montana court granted the executor’s petition to reform the will and modify the trust to allow the executor to support the election to designate the property held by the trust as qualified terminable interest property (QTIP) (see I.R.C. § 2056(b)(7)) to enable the estate to exclude it from Gillam’s estate using the federal estate tax marital deduction. Under federal tax law, property designated as QTIP, and thus excluded from the decedent’s estate, must be included in the estate of the surviving spouse upon the surviving spouse’s death.

Under the modifications approved by the court, the trustee was required to pay all of the net income from the trust to Evans, as well as “such amounts from the principal” as the trustee deemed necessary for Evans’ “health, education, maintenance, or support” in her “accustomed manner of living,” during her lifetime. The trustee was not permitted to distribute income or principal to any other beneficiaries during Evans’ lifetime but was to distribute the principal to Gillam’s children upon her death and pay federal and state gift taxes out of the trust principal.

Prior to Evans’ death in 2015, a dispute arose between Evans and the trustee about the amount of the trust principal that should be distributed to her to maintain her accustomed manner of living. Under Montana law, Evans had a right to require that the trust property be productive of income or convert it to productive property if the amounts the trustee distributed to her were insufficient to provide her with the beneficial enjoyment required to obtain the marital deduction. Pursuant to a settlement agreement, Evans released her rights under Montana law and her right to receive distributions from principal to maintain her accustomed manner of living in exchange for a lump sum of $750,000 and monthly payments of $10,833.33 for her lifetime.

The Oregon Department of Revenue and later the state tax court rejected the estate’s due process argument. The Oregon Supreme Court affirmed the judgment of the tax court, relying in part on the US Supreme Court’s decision in North Carolina Dep’t of Rev. v. Kimberley Rice Kaestner 1992 Family Trust, 139 S. Ct. 2212 (2019).  In Kaestner, the Court found that a state resident must have “some degree of possession, control, or enjoyment of the trust property or a right to receive that property before the State can tax the asset.” Id. at 2221. The estate asserted that because Evans had had no ability to control how the trust assets were invested, managed, or distributed upon her death, her in-state residency at the time of her death was insufficient to establish the required minimum connection to those assets.

Based on the rule established in Kaestner, the court concluded that Evans did not have to have the ability to control the trust assets as asserted by the estate. Rather, she had sufficient enjoyment of the trust principal and the income it produced to permit Oregon’s inclusion of the trust assets in her taxable estate because she had received a substantial one-time payment from the principal and had the potential right to distributions from the principal. Further, no other person could receive any part of the principal during Evans’ lifetime. Therefore, through Evans’ residence in Oregon, the state had the minimum connection to the trust assets required by due process to tax those assets.

Takeaways: The Oregon Supreme Court distinguished the facts in Estate of Evans from those in Kaestner, in which the state of North Carolina was precluded under the due process clause from taxing trust assets where the in-state beneficiaries had not received income from the trust, had no right to control the trust or distributions from it, and the trustee had absolute discretion over both the timing and amount of distributions (and had made none during the period in question).

Phil Cascio Sr. founded Cascio’s Storage and Warehouse, Inc. (CSW) and later established Cascio Investments, LLC (Investments). His eldest son, Philip, assumed the day-to-day management of the businesses when Phil Sr. grew older. Phil Sr.’s three other children had other careers and did not participate in managing the businesses. Nevertheless, Phil Sr. eventually divided the business interests among his children, which disappointed Philip, “who believed he should receive full ownership of the family businesses on account of the years of work he had poured into them.” Consequently, the relationships between the siblings deteriorated, resulting in a series of lawsuits.

Two of Philip’s siblings brought a shareholder-derivative suit against him, alleging that he had improperly used the family businesses as his personal piggy bank, amassing a large fortune. As part of a settlement agreement to resolve the dispute, Philip agreed to surrender his rights in Investments, leaving his two siblings as the sole owners. The three siblings would each own a one-third interest in CSW. Under the settlement, which was approved by the chancellor, Philip agreed to execute a noncompete agreement with CSW. The noncompete agreement that Philip actually signed, however, also precluded him from competing with Investments. After Philip signed the noncompetition agreement, the chancellor entered an order stating that the parties had executed all documents required to effectuate the settlement.

Takeaways: The difficulties resulting in the Cascio litigation likely could have been avoided if Phil Sr. had executed a well-thought-out business succession plan designed to equalize his children’s inheritances while also recognizing his son’s contributions to the family businesses. Attorneys should encourage clients who own businesses to create a succession plan well before their retirement that not only preserves the businesses but also facilitates peaceful family relationships.

LegalZoom, a consumer-facing legal services website, has applied to become an Arizona alternative business structure. An alternative business structure is “a business entity that includes nonlawyers who have an economic interest or decision-making authority in a firm and provides legal services in accord with the [Arizona] Supreme Court Rules 31 and 31.1(c).” If its application is approved, LegalZoom would be permitted to hire lawyers as employees to provide legal advice to consumers rather than contracting with independent attorneys. According to the ABA Journal, if LegalZoom’s application is approved, it will provide

Takeaways:  Commentators have debated whether attorneys employed by companies such as LegalZoom will be pressured to put the success of the company before their clients’ best interests. Rocket Lawyer, which is providing legal services to customers as a participant in Utah’s regulatory sandbox program, has also applied to become an alternative business structure in Arizona. 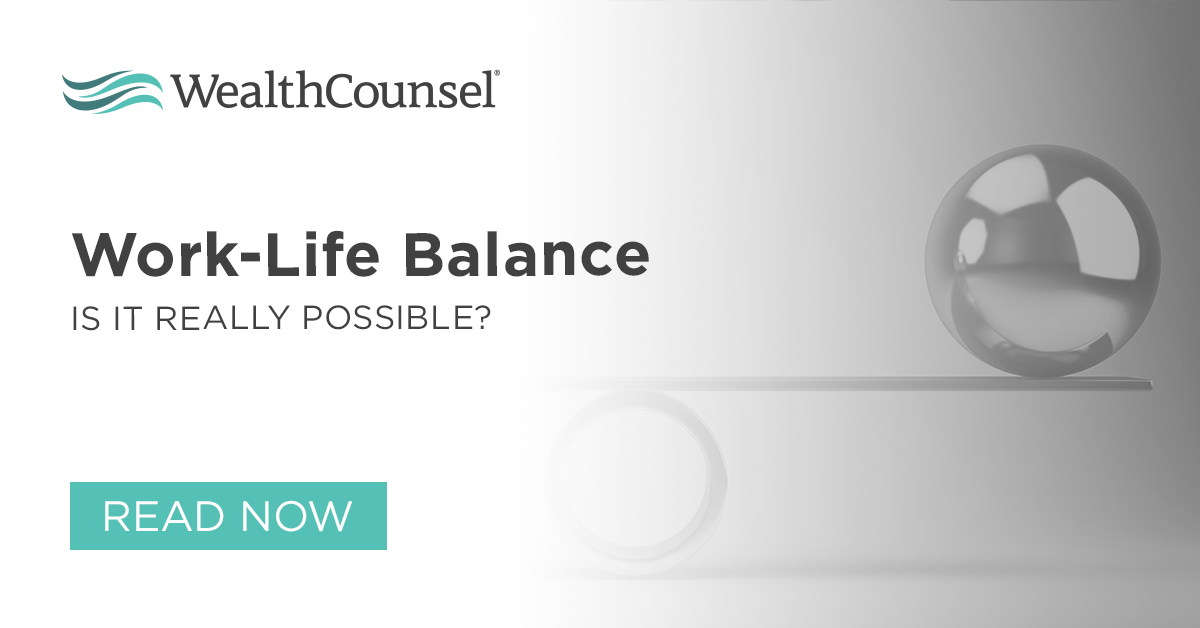 Work-Life Balance: Is It Really Possible?