While there are many ways to change the terms of an irrevocable trust, decanting proves to be one of the most effective methods. An irrevocable trust does not necessarily mean that it is unchangeable, as the terms can be altered after it is poured (decanted like a bottle of wine) into a new trust. Trust decanting is a useful tool for estate planning attorneys who are striving to make a trust better fit the needs of the client. The authority to decant a trust can be included in the original trust, or it can stem from the decanting statutes in more than thirty states.

The top-ranked states below have laws that are very friendly to trust decanting, so establishing a trust in one of these states can be advantageous. Read on to learn more about the best states for trust decanting.

Reasons to Decant a Trust

Life is unpredictable, so decanting a trust can offer flexibility to continue to achieve the purposes of a trust amid life’s changes. Here are some specific reasons to decant a trust:

To decant a trust, the trustee must have discretionary distribution authority in the original trust. This is true even if the trustee is a beneficiary of the trust. It may also be a requirement that the beneficiaries receive notice before a trust can be decanted. New terms of the decanted trust can include the following: 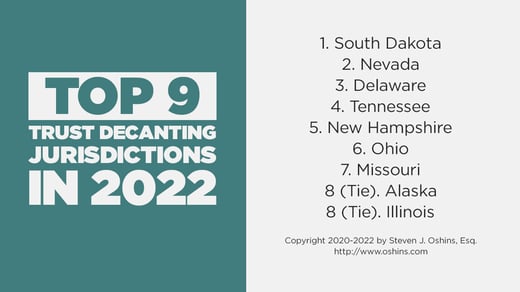 When considering the state in which to establish a trust, you should know about the advantages of states with specific trust decanting statutes. In 1992, New York was the first state to enact a trust decanting statute, but other states have come up with even better provisions since then, some of which include the following:

The top states are based on the rankings of expert attorney Steven J. Oshins as of 2021.


The First State ranks slightly lower than the two leaders because it does not allow decanting from a trust with an ascertainable standard to a discretionary trust. In addition, Delaware is tied for seventh place for the best states in which to create a dynasty trust and sixth place in which to create a DAPT.


Unlike Delaware, Tennessee allows decanting from a trust with an ascertainable standard to a discretionary trust. However, it does not allow the removal of mandatory income interest. Also, its statute is silent on the acceleration of remainder beneficiary interests. The Volunteer State ranks third for states in which to create dynasty trusts and is tied for sixth for states in which to create DAPTs.

Decanting a trust, whether in the client’s home state or in a different state, can produce several benefits. A trustee can use a power of appointment to direct the assets toward family members who need them. The trustee can also include assets in the estate so they receive a step up in basis at the time of the trustee’s death. This could save thousands of dollars for the surviving family members.

Learn from the Premier Expert on Trust Decanting

WealthCounsel is pleased to welcome Steven J. Oshins Esq., AEP (Distinguished), the creator of the State Rankings Charts, as the next speaker in our Thought Leader Series. He will present the “2022 Trust Decanting Update” May 26 at 1 p.m. (ET). His topics will include enhanced tax savings, asset protection, and divorce protection. The webinar is CLE eligible and free to attend. Click here to reserve your spot.

A Primer on Business Succession Planning

Current Developments in Estate Planning and Business Law: May 2022